Determination, resilience and compassion are attributes that Richard Whitehead, Claims Relationship Manager for NZI, takes into both his personal and professional life.

Having recently celebrated his 20-year anniversary with NZI, Richard looks back at his career and shares some personal learnings along the way.

UK born and Dunedin-bred, Richard started in the insurance industry in 1994 and joined NZI in 2001. Since then, he’s had a variety of roles within the claims team, from the claim centre through to senior manager roles. Since 2019, he’s been part of the broker claims partnerships team.

“It’s been such a joy to take 20 years of claims experience, and 26 years of industry knowledge, and wrap it all up in my broker claims relationships role. This is probably the most fulfilling job I’ve ever had; I love it.”

Richard recognises the importance of his role at a customers’ time of need.

“Claims; it’s where the rubber hits the road. When you are dealing with a broker or customer directly after they’ve experienced a personal or a business loss, we hope to help them overcome what they are going through. Basic compassion and understanding goes a long way.”

For Richard, the key for good customer outcomes starts with a good broker relationship that is built on communication and trust.

“You may have heard the cliché ‘partnership’, but it’s really a true partnership between us and our brokers that has been built over a considerable period of time, based on mutual respect and trust.

“It’s very important to have open and honest communication as well as being available, agile and responsive for our brokers.”

Richard’s determination to get positive outcomes aligns well to some of his personal experiences. 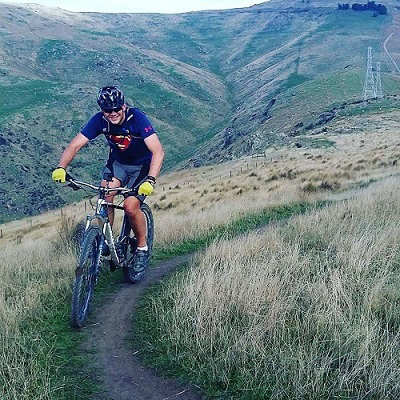 In January 2019, Richard went for his daily lunchtime bike ride. “I did a 25km cycle, but on the way back I was hit by a car at a roundabout. I was 48 years-old, I’d never been in an accident, never broken a bone, never been in an ambulance, never stayed a night in hospital and I’d never had an operation. The accident did that all in one go.

“I was six days in hospital and about five months at home. As I’d smashed my ankle, I had to sit for five months with my foot elevated and was unable to walk. Being extremely active prior to the accident and watching my muscle tone disappear was very hard to watch.”

But Richard’s determination to recover and be back on his feet was stronger than ever.

“The surgeon told me that I was not going to be able to bike for a year, but I told him to give me six months and I would be riding. I did my first ride six months after the accident and my first mountain bike shortly after.”

Part of Richard’s recovery was going to his local pool each night for several months.

“I’m a pretty resilient individual and you had to be after what happened. I was focused on being able to come back from that and exceed my surgeon expectations. I had to have a positive attitude and work hard to train my body, as an injury like this wouldn’t fix itself.”

“If you don’t find me biking in the Port Hills, trails or in Christchurch parks, you’ll find me doing jet ski or wakeboarding in the local lakes.”

Last month, Richard participated in the Aotearoa Bike Challenge 2021 and motivated his team in Christchurch to help reduce carbon emissions by riding a bike to work.

For Richard, his recent personal experience has provided a different lens when helping customers with their claims.

“When an unexpected event happens – whether a small personal one, or a larger business event – we can provide reassurance that we are here to help our customer, and we are going to help them get back on their feet.

“My aim is that we make their lives a little bit better in a very difficult time. We can’t change what happened, but we can make the road just that little bit easier to travel.”

Latest from Humans of NZI